Antibodies are specialised proteins (immunoglobulins) that circulate in the blood stream. They are produced by a white blood cell called a plasma cell. This cell produces specific antibodies in response to stimulation from foreign proteins (antigens). These are found on bacteria, viruses, toxins etc. with which the body comes into contact.

Antibodies can react with these foreign proteins and render them harmless. It is in this way that antibodies provide immunity against diseases caused by bacteria, viruses, etc.

How long do antibodies last?

Antibodies may not last for life. They may gradually decrease in the body, therefore the length of effective immunity varies depending on various factors, including the infection (antigen). It is therefore useful if the level of immunity, (i.e. amount of antibodies circulating) can be measured.

What is an antibody titre?

Serum is the liquid part of the blood after cells and substances such as fibrinogen, a component of the clotting process, have been removed so that serum always remains liquid. Despite the fact that the plasma cells have been removed the antibodies they produced are still present in the serum. The antibody titre is the highest dilution of serum that will react against a fixed amount of any particular antigen.

What do antibody titres indicate?

Antibodies are only produced after the body has reacted to the foreign material (its antigen), i.e. the particular infection or toxin. Thus a positive result at any dilution indicates exposure to that organism. Most antibodies tend to become weaker over time, therefore if there is a reaction at a very high dilution it means that the animal has a very good immunity, i.e. there are a high number of circulating antibodies against that particular disease.

Does it mean that if there is a high antibody titre to parvovirus, my dog has had parvovirus?

Not necessarily. As mentioned, antibodies do last for quite a long time in the circulation although the majority do become reduced over time. All it means is that your dog has been exposed to parvovirus or has been vaccinated against the disease relatively recently.

My dog had a blood test for leptospirosis. It came back negative. What does that mean?

A negative result, i.e. a lack of antibody titre to a particular organism, in this case Leptospira, can indicate either:-

1.  The pet has not been exposed to leptospirosis and is not suffering from that disease or

2.  Exposure has occurred so recently that there has been insufficient time for antibodies to be produced in sufficient quantities for them to be detected.

In the latter case it is important to obtain another blood sample in two or three weeks to see if the antibody titre has risen. If there is no increase in antibody titre on the second test then the suspected organism is clearly not the cause of the illness. 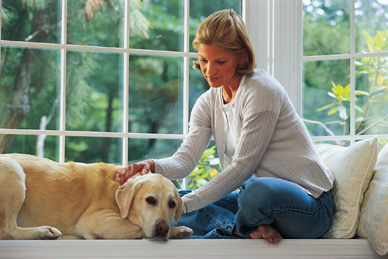 Are antibody titres used in the diagnosis of many diseases?

This is not an uncommon test when dealing with infectious diseases. Distemper, hepatitis (canine adenovirus), leptospirosis, parvovirus, feline enteritis (panleucopaenia) and feline immunodeficiency virus (FIV) together are all common conditions for which antibody estimations are useful both in cases of disease and also to establish whether immunity following vaccination is adequate or whether a booster should be administered.

Why are antibody titres used to diagnose diseases?

Many diseases will share similar clinical signs, therefore antibody titres will give an indication of the presence of specific disease. Antibody titres are also frequently used in the case of zoonotic diseases.

What is a zoonotic disease?

This is a disease that can be transmitted from animals to people. Quarantine was instituted in Australia originally to control rabies and other exotic diseases foreign to this country. If on return from overseas an animal becomes ill, sometimes antibody titres may be useful to pinpoint the cause and whether or not there is a likely risk to people.

© Copyright 2015 LifeLearn Inc. Used and/or modified with permission under license.