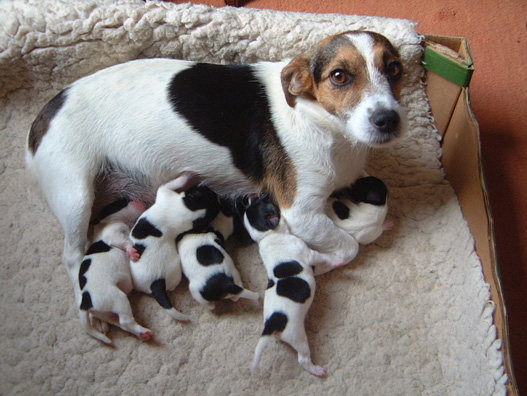 Is there a recommended vaccination programme?

Is the puppy likely to have any protection when I buy it?

Most puppies have some temporary immunity from their mothers. This disappears when the puppy is about two months of age. If the puppy has come from kennels or an environment of high risk such as a rescue centre it may have received protective vaccination as early as five weeks. In general puppies should receive their first vaccination at approximately eight weeks of age with a second vaccination at twelve weeks.

How will I know if my puppy has received any vaccinations?

If the breeder has arranged for the first vaccination to be administered you should be given a certificate to this effect with instructions regarding subsequent vaccination.

What is this vaccination likely to cover?

This will be noted on the certificate. Puppies are usually vaccinated against the “core diseases” distemper, parvovirus and hepatitis (canine adenovirus). Vaccination against other “non core” diseases may also be administered if there is a perceived risk, e.g. kennel cough, leptospirosis, etc. or if boarding kennel requirements dictate these additional requirements.

How often should these vaccinations be repeated?

In order to obtain good adult immunity a vacciantion at eight weeks followed by a further one at twelve weeks is essential. During this period the puppy should not be exposed to risk of infection by walking in places where unvaccinated dogs frequent, e.g. parks, pavements etc. A further vaccination should be administered at approximately sixteen weeks of age followed by a full booster vaccination twelve months later. However, risks of exposure to these diseases also need to be balanced with the importance of socialisation in your dog.

"In order to obtain good adult immunity an injection at eight weeks followed by a further one at twelve weeks is essential. During this period the puppy should not be exposed to risk of infection by walking in places where unvaccinated dogs frequent, e.g. parks, pavements etc."

Will a yearly booster then be necessary?

Until recently an annual booster against all the diseases vaccinated against originally was advised. Recent work has now shown that provided the puppy receives vaccinations at 8, 12 and 16 weeks followed by a booster vaccination after 12 months, further boosting of “core vaccinations” may only be necessary every every three years depending on the vaccine used.

Kennel cough outbreaks in this country are usually caused by the bacterium Bordetella bronchiseptica. Some kennels may prefer the use of a nasal form of the vaccination,especially if a dog has not previously received a vaccination, although an oral vaccination is now available. At certain times of the year, particularly late summer and autumn, Bordetellosis (kennel cough) is very prevalent particularly among boarding dogs so many kennel owners may require a further kennel cough vaccine.

© Copyright 2017 LifeLearn Inc. Used and/or modified with permission under license.