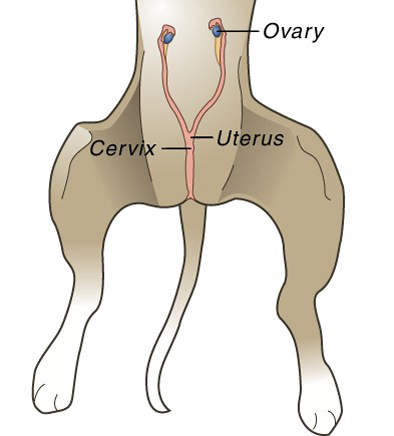 Why should I have my dog spayed?

Spaying should always be considered if you are keeping your female dog merely as a pet.  It should be remembered that guide dogs and other assistance dogs are routinely neutered.  It has many advantages and few disadvantages.

What are the advantages of neutering (desexing) in the female dog?

Is spaying performed for any other reason?

The operation may be performed for several medical conditions.  These include:

It should be remembered that many spayed bitches successfully participate in obedience work.

What are the disadvantages?

Most of the disadvantages are fallacies. The most quoted of these is that the bitch will become fat, characterless, useless as a guard dog etc.

Obesity is probably the most commonly quoted disadvantage. Judicious feeding of a correct diet without excessive snacks should adequately control any problems of fatness, just as it does in the entire animals.

She will not become characterless.  Guarding ability, intelligence, playfulness and affection are not usually significantly altered in the spayed female.

When should the operation be carried out?

Recent work has shown that spaying of the immature puppy does not have any disadvantage and the technique is much simpler.  However conventional veterinarians advise that the operation should be carried out during puberty.

Is there any alternative to surgical operation?

Your bitch’s cycle can be controlled by medical means.  There are a variety of compounds which are used to inhibit the cycle, many of which are similar to the drugs used in the contraceptive pill.  These drugs are available either as tablets which can be used to delay or to stop a season completely. Injectable drugs can be used which can have longer effect.

However, to effectively desex the dog for life, the drugs have to be used on a continuous basis and then side effects are likely to occur.  The drugs are not inexpensive and if long-term heat suppression is required, surgical intervention is preferable.

"However to effectively desex the dog for life the drugs have to be used on a continuous basis and then side effects are likely to occur."

Special panties designed to hold an absorbent pad to prevent the bitch’s discharge from reaching the ground and thus advertising the fact that she will soon be receptive are available.  These are, of course also a barrier to successful copulation.  However the attractive female pheromones are also present in the urine and bitches in oestrus frequently wish to urinate little and often when of course the knickers have to be removed and the visiting card is left!

There are certain products available both to apply to the rear quarters of the bitch and also for oral administration which are said to reduce her attractive odours while in heat.  The most effective of these contain chlorophyll but have not been shown to be reliable.

Are there any dangers associated with the operation?

Spaying is a major, although routine, operation and requires general anaesthesia.  Risk cannot be discounted entirely although with modern anaesthetics and surgical procedures this should not be a cause for concern when balanced against the advantages.  In young animals the risk is significantly lower since operating time is much less.

What happens when I leave my dog for this procedure?

She will have a pre-operative check, and be premedicated which usually includes an analgesic agent so that she does not feel any pain or discomfort on recovery.  She will then undergo general anaesthesia and abdominal surgery will be performed, during which the womb and ovaries will be removed.  The abdominal muscles and also the skin are sutured. Usually she will only be hospitalised for the day although sometimes it may be decided to keep her in overnight if she is not fully recovered from the anaesthetic.

Usually a special collar may need to be worn for a few days to prevent her licking at the wound.

Are there any post operative precautions I must make?

Post operative care is similar to that for any routine major surgery.  Exercise must be restricted for a few days and she will need a follow-up appointment to check her recovery and remove sutures if necessary.  Specific instructions will have been given to you when you collected your pet following the operation regarding recalls.

I am not keen on having my bitch spayed because I want to keep a puppy from her.

If you wish to show your bitch and breed from her this obviously is a reason not to have her neutered at this time.

The wisdom of mating crossbreds and mongrels has to be carefully examined.  The desire to retain offspring has to be weighed against the disadvantages of having to find good homes for the other puppies in the litter, bearing in mind that rescue organisations are over run with unwanted dogs, mongrels, crossbreeds and pedigrees.

There is no scientific evidence that one litter has any permanent effect on the bitch.  Indeed sometimes pet bitches, when nursing a litter, will become psychologically torn between their owners and their offspring, often to the detriment of the puppies.  It is a subject which we will be more than happy to discuss in depth.

© Copyright 2017 LifeLearn Inc. Used and/or modified with permission under license.