Pruritus - The Problem of the Itchy Dog 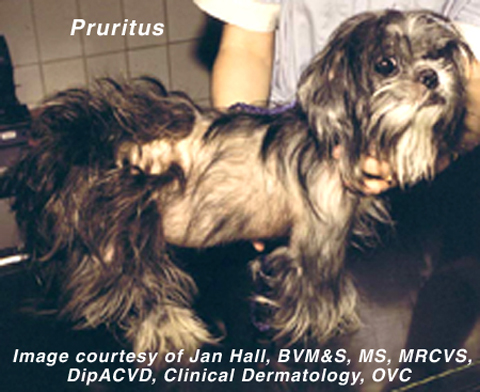 Pruritus means itching. It is common in many types of skin disorder especially allergic inflammation and parasitic infections. We infer that the animal is itching because it is scratching.

How common is it?

Pruritus is a common sign in many types of skin disorder. It usually results in eczema which is a general term for any patch of inflamed skin. This is due to self trauma. This is usually a non-contagious skin inflammation which is marked by early redness, itching, often minute papules and vesicles, with weeping, oozing and crusting. This can be later followed by scaling and thickening of the skin, often with pigmentation in long standing cases.

What causes pruritus and eczema?

Skin disease is one of the most common reasons for dog owners to seek veterinary advice. The skin, although it is the largest organ of the body and has many functions, can only react to insult in a limited number of ways, pruritus being one of the major signs when there is a problem.

"The skin, although it is the largest organ of the body and has many functions, can only react to insult in a limited number of ways, pruritus being one of the major signs when there is a problem."

How can the problem be tackled?

Skin diseases can be challenging and frustrating both for owners and veterinarians. In order to reach a diagnosis a wide range of laboratory tests and trial treatments may have to be undertaken. In some cases this may take months and is likely to be quite expensive.

Despite all the tests, the underlying cause of your dog’s itchy skin may never be completely determined and lifelong symptomatic therapy may be required. Even if a definite diagnosis is made, allergic skin disease most often cannot be cured and controlling the signs of disease is a more reasonable expectation.

Is all pruritus that complicated?

No, in some dogs pruritus is seasonal and the most common cause is parasites usually fleas (mange mites can sometimes be involved). Other causes may be due to inhalant allergies (atopy). After flea allergy this is the most common allergic skin disease in the dog.

Dietary allergy can also cause itching. 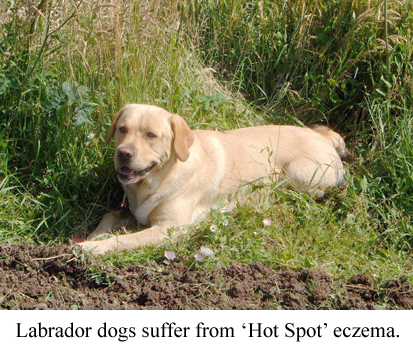 Are some dogs more prone to itchy skins than others?

There appear to be predispositions, for example West Highland White Terriers are notorious for their “Westie skins”. Labradors and Retrievers appear to be very prone to hot spot, or wet eczema (acute moist dermatitis).

Is the chance of cure remote?

It depends upon how far we go with testing and the results of those tests. As mentioned previously you could spend a considerable amount of money and still end up with no diagnosis. In these cases treatment may have to be intermittent or continuous for the rest of the pet’s life. However these are extreme cases and the majority of itchy dogs do respond very well to relatively simple treatment.

If the condition is seasonal your dog may stay in remission until the following year.

Please do not hesitate to contact us with any further queries or concerns. We will do our best to help.