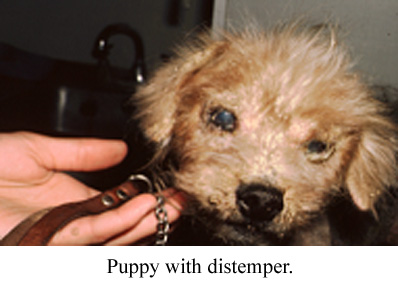 Distemper is a highly contagious viral disease of domestic dogs. Some other species, including ferrets, skunks and racoons, are also affected by the disease.  Seal distemper is caused by a very similar virus.

How is the disease spread?

The virus is spread primarily by direct contact between a susceptible dog and a dog with the disease. Coughing can spread the virus over short distances. The discharge from the nose is heavily laden with the virus.

What are the clinical signs?

As with many infections, the clinical signs can vary from one dog to the next. The main signs are fever, loss of appetite, a thick yellow discharge from the nose and eyes, coughing and seizures.

Are there other diseases causing similar signs?

There are many diseases that cause coughing, fever, loss of appetite or seizures. However, this combination is unique to canine distemper. If the diagnosis is in doubt, a blood test can be performed for confirmation.

What is the treatment?

Virus infections do not respond to antibiotics although they are used because many secondary bacterial infections occur. Intravenous fluids, cough suppressants, and drugs to control seizures often have to be used and some of the new human antiviral preparations have been used with some success. Intensive nursing care is often essential.

Do dogs recover completely from this disease?

Usually, but not always. Some may be left with persistent nervous twitches (chorea) and recurrent seizures. 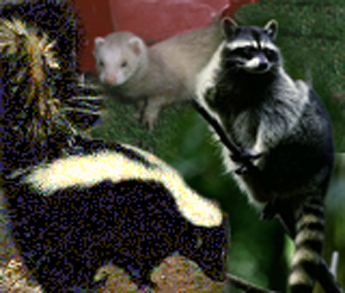 How can I prevent my dog from becoming infected?

A very effective vaccine is available to protect dogs against distemper. It is given to puppies, as young as 6 weeks of age, in a series of usually 3 injections.  Revaccination is strongly recommended usually about every three years but more frequently in areas of increased risk.

How common is distemper?

Distemper is a worldwide disease. Fortunately, vaccines have been very effective in reducing its incidence to very low levels in pets, particularly in the Western world. Stray dogs can be a serious source of the virus, as can skunks, ferrets, foxes and racoons in some parts of the world. Dogs in Australia are rarely affected by distemper due to a combination of effective vaccination and minimal contact with prone species in the wild.