Babesiosis is a tick borne disease which causes destruction of red blood cells resulting in anaemia and jaundice. Acutely affected dogs (and cats) appear depressed, weak and are disinclined to eat (anorexic). They have pale membranes, (e.g. lips, eye lids or tongue) and often have a fever. The passing of very dark coloured urine is also frequently noted. In areas where the disease is common puppies and younger dogs are mainly affected. The disease cannot be passed directly from one animal to another.  It is only spread by bites from ticks infected with the protozoan (one celled) parasite, Babesia canis.

Babesiosis is common in many parts of the world including large parts of South East Asia. However, thankfully due to the strict quarantine laws of this country, Babesiosis is very rare in Australia. 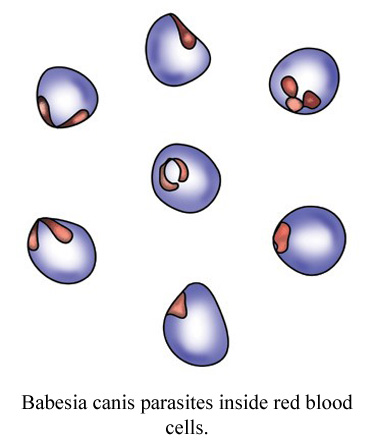 What is the cause of the disease?

The disease is caused by various types of a protozoan (single celled) organism which causes the disease in many domestic and wild animals.

How does Babesiosis spread?

The parasite cannot survive outside the dog or the tick vector. Furthermore the tick has to feed on an infected dog two or three days before it becomes infected.

Can we catch Babesiosis?

Unlike some other diseases prevalent in Europe, the canine Babesia species do not appear to cause disease to man, in other words it is not a zoonotic disease.

Is the disease very common?

Thankfully, canine Babesiosis, despite an almost worldwide distribution is very rare in Australia. The disease is endemic in our nearest neighbours, South East Asia.  It has always been prevalent in Southern Europe and appears to be spreading northwards across France and Germany.

Babesia canis is the most common of three types which infect dogs. Other types infect cats and other animals.

Is it important in Australia?

Until relatively recently Babesiosis was unknown in Australia except with animals in quarantine. Cases have been previously largely confined to the tropics although recently a new smaller species has been isolated in South Eastern Australia.

Is there much danger then if we move overseas?

This depends where you go. The disease is endemic in South East Asia. The transmitting ticks, Rhipicephalus and Dermacentor species are prevalent in Southern Europe and there are other ticks that may transmit the protozoan causal agent.

Will I know if my dog has been infected if we move overseas?

If your dog (or cat) becomes infected overseas, there may be no signs for 10-20 days, (i.e. during the incubation period). Signs can vary from slight malaise (being a bit “off colour”) to serious haemolytic disease with lack of appetite, dark coloured urine, multi-organ failure and even death in 24-48 hours. Even very mild cases that recover without treatment may still be carrying the parasite and act as carriers.

"Signs can vary from slight malaise (being a bit “off colour”) to serious haemolytic disease with lack of appetite, dark coloured urine, multi-organ failure and even death in 24-48 hours."

Is there any treatment?

Drugs are available which are very effective provided a correct diagnosis can be arrived at without delay. If your dog shows any signs of lethargy, jaundice or dark coloured urine, it is important that you consult your veterinarian without delay, particularly if you have lived overseas in countries such as South East Asia where the disease is very prevalent. Be sure to tell us this at the outset.

Is there anything that can be done to prevent my dog becoming infected?

Since the disease is only transmitted by the bite from infected ticks, even if you are moving to an area where Babesiosis is endemic, there is no danger provided you can ensure your pet is not bitten by an infected tick. There are several species of tick involved but the most common is Rhipicephalus sanguineus, the brown dog tick. Therefore it is essential that adequate anti-tick control is exercised during the period of your overseas stay. This not only includes spraying the animal but also daily removal of ticks. This prevents transmission of the disease. Sleeping areas and the pet’s environment should also be treated with a recommended anti-tick preparation (acaricide).

My dog does not like sprays of any sort.  Is there anything else I can do?

There are now several options available for tick prevention including tick collars, ‘topspot’ preparations and chews. Careful daily grooming is also essential to ensure that any ticks acquired from the environment are removed before they have a chance to attach to the dog.