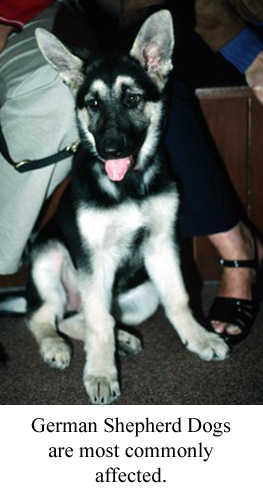 How do I recognise it? What are its signs?

The condition can often go undetected in its early stages and is frequently discovered by a veterinarian during a routine health check, e.g. booster vaccinations etc. Initially the dog may show no signs. However, as the disease progresses, straining with painful defaecation, often with blood streaked faeces, may be noticed. There will be excessive licking and sometimes self-mutilation together with a reluctance to sit. Tail movements may become painful and there may be resentment of any approach to the back end. Many dogs show vague personality changes. If your dog does show any of these signs a veterinary check-up is a good idea.

What does the condition involve?

What is the cause?

Work over the last decade indicates an immune mediated basis. Some families of German Shepherd dogs appear particularly prone so there may be a genetic basis.

Is there any sex or age predisposition?

No. Dogs of both sexes can be affected. Dogs over about one year can become victims of the disease. There appears to be no predilection for sex although it has been suggested that unneutered animals, of either sex, may have a higher prevalence. 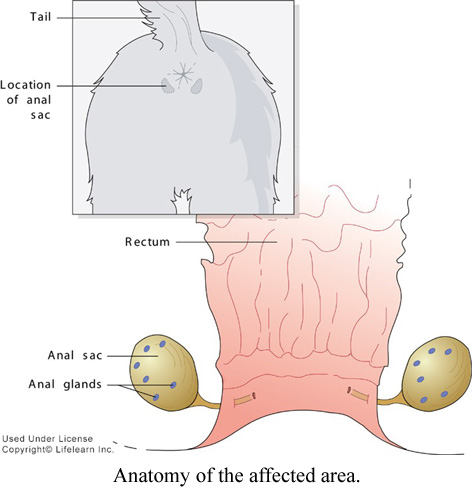 Since even today the cause of the condition is not fully understood it is not surprising that various forms of treatment are currently used.

Medical treatment involving antibiotics for the infection and analgesics for the pain and discomfort will often result in improvement particularly in mild cases diagnosed early but unfortunately recurrence can occur.

Work over the last ten to fifteen years which has definitely established the immune mediated nature of this disease has led to the use of cyclosporine, a powerful immunosuppressant drug widely used in human medicine. This drug does offer a better chance of control if not total cure, than any other drug presently available but is extremely expensive. However its cost can be reduced somewhat if combined with other drugs such as ketaconazole which although also expensive, is not as expensive as cyclosporine and does allow reduction of dosage by sometimes 50% or more.

Other palliative measures include simple procedures such as increasing ventilation by clipping the area, particularly in full coated dogs, together with careful systematic bathing using antiseptics which we will provide just to keep the area clean, especially after defaecation.

"Other palliative measures include simple procedures such as increasing ventilation by clipping the area, particularly in full coated dogs, together with careful systematic bathing using antiseptics which we will provide just to keep the area clean, especially after defaecation."

Using a combination of surgery, drug therapy (cyclosporine etc) and other modalities such as cryotherapy, laser treatment etc, 80% of affected dogs will, after treatment, go on to enjoy normal happy lives without substantial inconvenience. Success however very much depends on early diagnosis and treatment.

Until very recently approximately 20% of cases did not respond to treatment irrespective of the type. With the use of cyclosporine these numbers have fallen dramatically although unfortunately the use of this drug cannot in all cases be considered a cure. However, it is one of the best palliative agents presently available.