Pukky the Groodle and her Surgery. 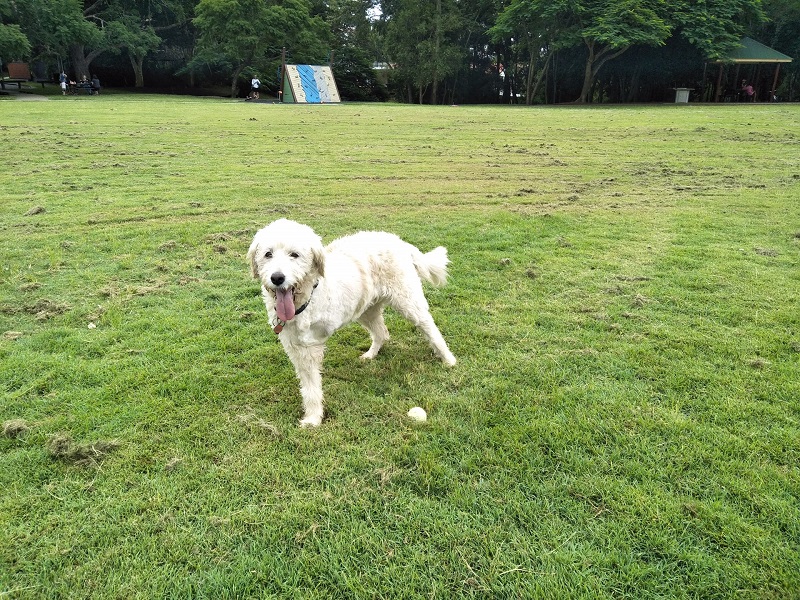 Meet Pukky the 11 year old, golden groodle.  She’s been coming to the Holland Park Vet Clinic for routine visits over the years but in February this year it was a more concerning visit.

Pukky’s left foreleg was sore and there was a firm lump towards the top of her leg that had developed over the short time of two weeks.  She was admitted the same day for a sedation procedure that would allow a sample of the lump to be taken for cytology. This procedure is called a fine needle aspirate.  An xray of the area was taken at the same time and showed the lump to be soft tissue only with no bone involvement.

Unfortunately, the cytology suggested that the lump was a type of soft tissue sarcoma. This meant cancer and the prospect of the lump continuing to grow.  Options for Pukky and her family at this stage involved referral to a cancer specialist for further advice or further investigation at our clinic. Pukky remained on pain relief medication while decisions were made.

Pathology confirmed that Pukky’s lump was a soft tissue sarcoma. This type of tumour is uncommon to spread to other areas of the body. However, it is locally invasive and very important to remove a good margin of normal tissue around the cancer when surgical removal is performed to stop it growing back.

Given the location of Pukky’s sarcoma wrapping around her upper leg the option for good surgical margins meant amputation of her leg. She visited us again about a week later and had her front leg including her shoulder blade surgically removed.

Pukky was kept comfortable with many levels of pain relief and she has recovered very well from her busy month of vet visits. With gentle practice we’re sure that Pukky will continue to gain confidence on her three legs. The cause of her pain has been removed and the surgery has given her a much improved prognosis for the future.

As you will see in her photo the unfortunate but necessary intervention has Pukky back to be a happy and healthy (and active) dog. Thank you to her dedicated owners who have let us share her little story.